Beneficial insects that will help battle the emerald ash borer (EAB), a highly destructive pest of ash trees, will be released in Jefferson County. Over the next few weeks several thousand stingless, parasitic wasps will be released at Whitham Woods near Fairfield, Iowa. This is the first release of the natural enemies of EAB in Iowa. 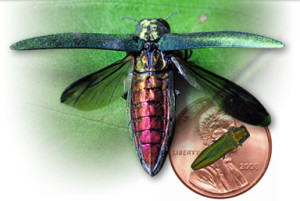 When EAB was accidentally introduced into North America from Asia, its natural enemies, unfortunately, did not accompany them. This effort is being made to reunite pest and natural enemies to help suppress EAB populations. Following rigorous testing and research one or more parasitic wasp species, native to Asia, have been released in 23 of the 25 states where EAB has been detected. The parasitoids were produced and supplied by the USDA EAB Parasitoid Rearing Facility in Brighton, Michigan. 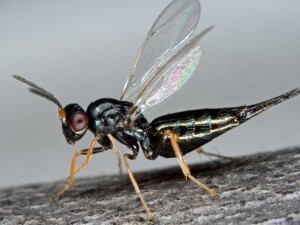 Tetrastichus planipennisi female wasps, which are about the size of a grain of rice, are one of two species to be released

“Due to the current situation of EAB in and around Fairfield, biocontrol seems justified at this point in time, said Mike Kintner, Iowa Department of Agriculture and Land Stewardship EAB and gypsy moth coordinator. “The use of biocontrol will not be a ‘silver bullet’ for the problems we face with EAB, but the natural enemies will serve as a long-term management strategy to lessen the impact of EAB.”

The second wasp species being released – Oobius agrili female wasps – are the size of a gnat, lay eggs inside EAB eggs

The two species of parasitic wasps available by USDA Animal Plant Inspection Service target the larval and egg stages of EAB. Tetrastichus planipennisi female wasps, which are about the size of a grain of rice, lay eggs inside EAB larvae, terminating their development into adult beetles. Oobius agrili female wasps, which are the size of a gnat, lay eggs inside EAB eggs, parasitizing them before given the opportunity to hatch. Both species are harmless to people.

According to the USDA Forest Service, Iowa has an estimated 52 million rural ash trees and approximately 3.1 million more ash trees in urban areas. Additional suitable sites will be approved and utilized for biological control releases.

More information about EAB and other pests that are threatening Iowa’s tree population, go to www.IowaTreePests.com. P