Did you know that prior to 1977 and the passage of The Surface Mining Control and Reclamation Act (SMCRA), there were no regulations to clean up strip mines once the mining operations ceased?
This means states with historic coal mining, such as Iowa, were left with pockets of barren “abandoned mines” for several decades.

Iowa has more than 12,000 acres of abandoned coal sites mined prior to 1977, largely concentrated in Mahaska and Marion Counties, but also present in Monroe, Van Buren, Wapello, and Davis Counties.

Mine Reclamation is expensive, often costing $15,000 – $20,000 per acre. Since 2006, Pathfinders has worked with local conservation groups to secure Watershed Cooperative Agreement Program grants from the Office of Surface Mining to help fund mine reclamation projects.

With Spring in the air, construction in underway at several abandoned mine sites. 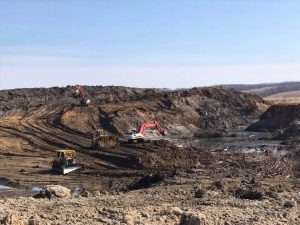 Here is a picture of construction at the Northup North abandoned mine land reclamation project in Davis County. Cleared trees, debris, and spoil piles are used to fill in low areas and shallow pit ponds.

We are looking forward to continuing with reclamation to improve these abandoned areas.